Happiness, Courage and Power:
Women as the key for a successful economy

Happiness, courage and power were the main themes of the 3rd German-Arab Women’s Forum, for which the Euro-Mediterranean-Arab Association EMA invited several hundred participants from business, politics and society to Berlin. The event encouraged the audience to a change of perspective beyond the beaten tracks. Elke Ferner, Parliamentary State Secretary of the Federal Ministry for Family Affairs, Senior Citizens, Women and Youth, gave a vivid description of this triplet in her welcome address: “Those who pursue their own happiness and want to choose by themselves what their happiness is need to have the courage to claim and to shoulder the responsibility of power.” In the panel concerning the question “What Does Happiness Mean?” His Excellency, the Ambassador of the United Arab Emirates, Ali Abdulla Mohamed Saeed Alahmed, reminded the panelists of the United States Declaration of Independence of 1776. Here, the pursuit of happiness had been laid down as a fundamental right to all human beings. His country even dedicated a whole ministry to happiness, which has been led by a woman since its introduction. The podium guests found this emphasis of happiness on the government’s agenda to be a courageous step.

“Courage for New Paths” was revealed in the following panel. The women on stage offered personal insights into their remarkable biographies. No matter whether Nouzha Skalli, former Moroccan minister for women and co-author of the reformed family code Moudawana, or Viola Klein, the award-winning entrepreneur, who first could not see much benefit in parental leave for fathers until she realized that the men in her IT company returned with improved organization skills from their parental leave: They all made clear that men have nothing to lose, but a lot to win if more participation rights were conferred to women.

How to deal with setbacks was a question addressed by the Lebanese-born professional boxer Rola El-Halabi. Despite her personal stroke of faith, she returned to the boxing ring with new strength winning her three world championships.

Mounira Latrache, head of the YouToube Creator Space in Berlin, had to show courage on her own path as well. She stressed that, like most men, also women should be able to pursue their careers from early onwards. There is a great number of qualified women who could fill in open positions, especially in the media sector. This was demonstrated in the lively discussion in the panel concerning “Women – Power – Media”. Here, the TV journalist and former director of the NDR Broadcasting Center in Hamburg, Maria von Welser, found that “the number of average men who I have come across in my professional career is legion”. Thus, a women’s quota cannot fail based on an alleged lack of sufficient qualified women.

There is no way around women

“Already today women make up more than half of all university graduates in many Arab countries”, stressed the president of the EMA, Christian Wulff, former Federal President of Germany. In the past two decades the role of women in the world has changed significantly. Today, there are more women than ever represented in governments, parliaments, courts and other relevant institutions in many Arab countries.

In the course of the Forum the activities of women as entrepreneurs were acknowledged as well. The economic participation of women was in the focus of the discussions. The professor of Educational Sociology and Labor Market Research at the Humboldt University, Berlin, Jutta Allmendinger, PhD, explained that women with a job guaranteeing their own income see their lives as more autonomous and happier than other women. There is a need to make women aware of their opportunities, women from rural areas and university graduates alike. This applies more in Arab countries than in Germany – even if, despite all visible differences, many women here and there encounter similar challenges. In this respect the Forum contributed to raising awareness in Germany for the diverse entrepreneurial activities of Arab women. 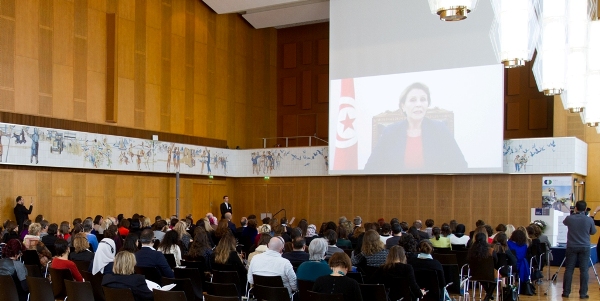 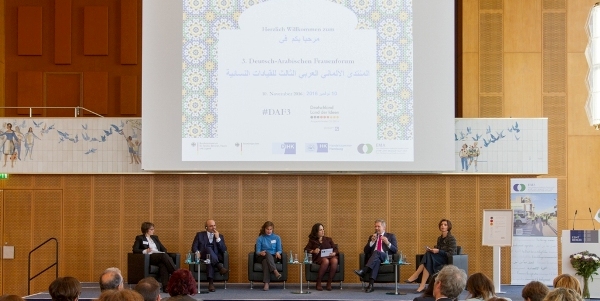 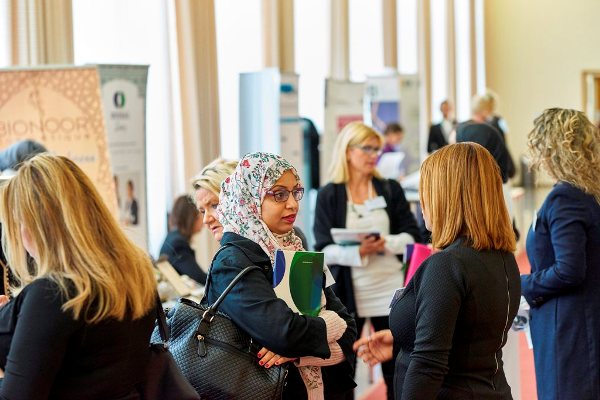 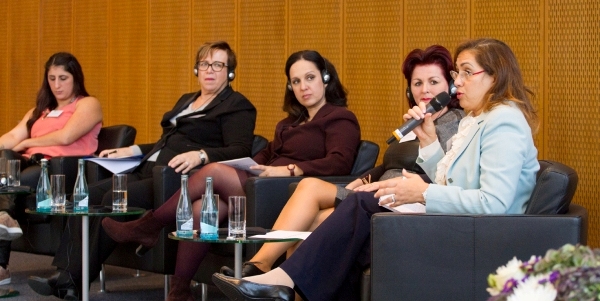 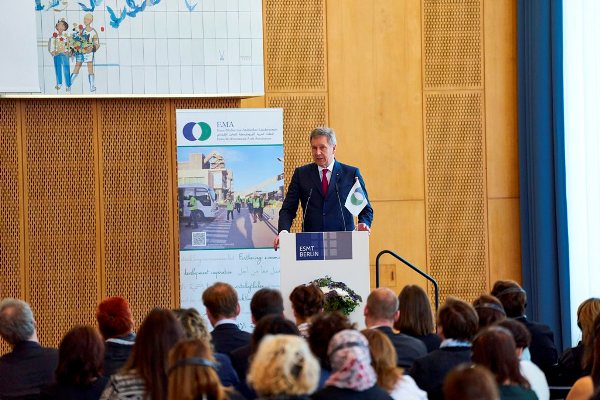 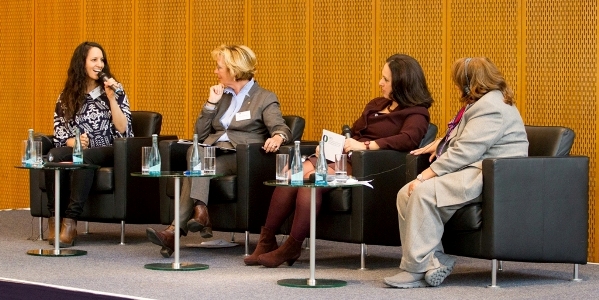 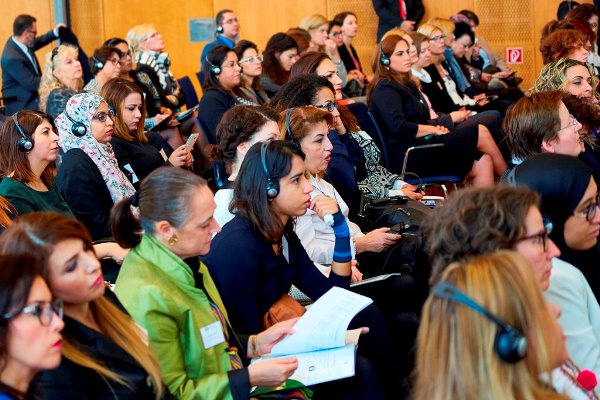 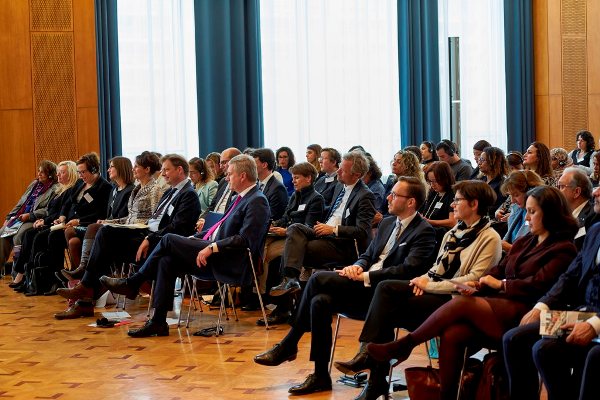 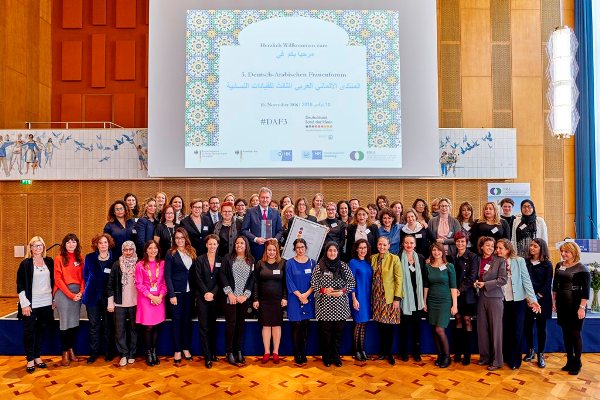 Award for the mentoring project Ouissal

Amongst the audience there were also participants of the German-Arab mentoring project Ouissal. Julia Arnold, Head of the International Department at the Association of German Chambers of Commerce & Industry (DIHK), addressed them directly by saying: “You are role-models and ambassadors for other women and future generations.” The Ouissal project had received the award “German Landmark 2016” by the initiative “Germany – Land of Ideas”. The Forum offered an ideal setting for the festive award presentation to the EMA managing director, Clara Gruitrooy. Anke Müller, representative of the initiative “Germany – Land of Ideas”, highlighted that the Forum itself could serve as the laudation for the project. It shows just like the project Ouissal itself how we live together as a community and how we want to live as neighbors.

The EMA initiated Ouissal in 2012 in cooperation with the German Federal Ministry for Family Affairs, Senior Citizens, Women and Youth within the framework of the transformation partnership with the Federal Foreign Office. The project strengthens the economic participation and the intercultural exchange of women in Germany, Tunisia and Morocco. It includes interdependent learning from each other and addresses especially young start-up entrepreneurs with the objective of sustainable economic development. The German and Arab tandem partners work together on the development of entrepreneurial activities in sectors as diverse as recycling, IT and organic cosmetics. Aside from the concrete contribution to economic stabilization and the employment of women, Ouissal serves the purpose of higher visibility of female entrepreneurs in public and intercultural dialog.

In Arabic, Ouissal means something like “connection of like-minded people”. In this sense, the EMA is building bridges across the Mediterranean Sea to connect German and Arab entrepreneurs. Moreover, the EMA had thrilling news to announce: The project Ouissal will be extended beyond 2016 thanks to the Federal Ministry for Economic Cooperation and Development. Monia Rizkallah, violinist at the German Opera, dedicated a piece, arranged by herself, to the connections between the three countries creating a medley of the national anthems of Germany, Morocco and Tunisia.

The German-Arab women's network is growing

The constantly growing German-Arab women's network shows that the EMA fills a gap in German-Arab cooperation even beyond Ouissal. The Women’s Forum was perceived as a successful and refreshing format by the Saudi-Arabian journalist and former chief broadcaster in the English section at Jeddah Broadcasting Station, Samar Fatany: “For the economy and for progress it’s very vital and important to engage women’s expertise and try to find solutions to the problems and the challenges that we face in the region today.”

After all, 50 turned out to be the number of the day. More than one speaker mentioned this number, as it depicts in per cent the proportion of the female population. One simply cannot ignore the contribution of women. One cannot leave half of the resources unused. For the economic cooperation between Germany and the Arab countries – and this is certain – there is no way around women.