Towards a New Phase of Euro-Mediterranean Partnership!

“We have to change the narrative of our relations!” With this statement in his opening speech at the 1st Mediterranean Summit, the former Secretary-General of the Union for the Mediterranean (UfM), H.E. Fathallah Sijilmassi, emphasized the importance of new ways of cooperation for all actors in the Mediterranean and Middle East regions. The EU should shift its focus more towards the south – for instance regarding the issues of trade and investment or women and youth. Especially young female entrepreneurs and women in leadership positions are an asset in the Mediterranean region. He expressed his delight at the German-Arab mentoring program Ouissal that was initiated by the EMA in 2012. “Our cooperation should not only focus on the political and economic levels, there should also be an academic dimension”, he welcomed a continued expansion of the Erasmus program towards the countries of the southern Mediterranean.

One former Ouissal mentor was represented on the stage of the Mediterranean Summit: the Moroccan Intelcia manager Nadia Ben Bahtane. She gave insights into her experience of swimming through the Strait of Gibraltar as the first Moroccan woman ever – a symbol of connection between Europe and Africa. This connection is created in reality by her employer Intelcia, one of the largest at several African locations. “Intelcia is investing heavily in education, training, coaching, and support for the development of young talents and pursues a strong internal support and mobility policy”, said Ben Bahtane.

The EMA and Its Members Have a Pioneering Role

In his words of welcome, EMA Vice-President Dr. Abdelmajid Layadi outlined how especially the audience could help by offering their expertise to the countries of the southern Mediterranean: “No matter if it is about building the necessary infrastructure or modernizing the industry, building a modern education system or institutional reform and development, I am convinced that as a participant in this Summit, you have an important role to play in shaping the new ways of Euro-Mediterranean partnership.”

H.E. Dr. Jawad Al Anani, former Deputy Prime-Minister and Foreign Minister of Jordan, called for more openness. One should not be afraid of cooperation. The peoples of the Mediterranean region have interacted with each other and foreigners for thousands of years. Now, it is time to create a counterweight to the Chinese and American influence in the region. He cited, for example, the development of vocational training schools and the transition from rent-based to productive economies.

Carolin Welzel, Head of “International Organizations” at the EMA partner Agency for Business & Economic Development AWE, gave good examples of how such a transition could be accompanied by Germany and Europe. She presented the AfricaConnect and AfricaGrow programs recently initiated by the German Federal Ministry for Economic Cooperation and Development (BMZ) as part of the Development Investment Fund (EIF) as well as the special training and employment initiative and the long-standing develoPPP.de program, which is undergoing some updates and adaptations this year. With these initiatives, the German government supports the entry of German small and medium-sized enterprises into foreign opportunity markets. Further information can be found on the BMZ website here.

Organized by the EMA in partnership with the AWE, the Commerzbank, and the Association of Mediterranean Chambers of Commerce and Industry ASCAME, the Summit produced a lively panel discussion on the realities and challenges of the economic situation in the Mediterranean region. The German Ambassador to Tunisia, Dr. Andreas Reinicke, praised his host country for the well-organized transition and advocated “Tunisia as an opportunity”, for example in the areas of ​​IT and AI off-shoring. Regarding his concerns that the inter-Maghreb trade stagnates because of the unresolved situation between Morocco and Algeria, H.E. Nor Eddin Aouam, Ambassador of Algeria to Germany, commented that both countries would have some of the strongest bilateral foreign trade relations in the region.

Being the CEO of Libya’s largest private-sector company, Chairman of the Libyan General Union of Chambers, and a member of the Libyan House of Representatives, Mohamed Raied reported from his home country where daily life continues despite the ongoing crisis: “The Libyan people refuse a return to dictatorship!” As further discussants, EMA Secretary-General, Clara Gruitrooy, welcomed ASCAME Vice-President Emanuele Garzia from Italy, who pointed out that the EMA is the only German member of ASCAME.

The Head of the Department for Basic Policy Issues, Private Sector, Trade, and Rural Development at the BMZ, Gunther Beger promised support for companies from the German government: “The BMZ is aligning its services with other services specifically addressed at the needs of the private-sector economy. The new Development Investment Fund created by the German government is the gate to a program for promoting African small and medium-sized enterprises. It aims to activate even more German and European companies for an engagement in Africa.”

In recognition of their merits and commitment to international understanding and cooperation, both H.E. Fathallah Sijilmassi and H.E. Dr. Jawad Al Anani received the honorary membership of the EMA. H.E. Saoud bin Abdulrahman Al Thani, Qatar’s outgoing Ambassador to Germany, and Mohamed Raied were each awarded the status of EMA Ambassadors for their active involvement in various EMA activities.

In addition to the high-ranking guests from the Mediterranean region, the Mediterranean weather was also a guest in Berlin. In the air-conditioned Haus der Commerzbank, however, cold drinks and ice cream were served as refreshments during the networking breaks. H.E. Fathallah Sijilmassi and Malta’s Ambassador to Germany, H.E. Dr. Albert Friggieri, enjoyed a splendid bilateral conversation. H.E. Sijilmassi related to the short distances and the hospitality of the island country where the heart of the Mediterranean beats. In this spirit, with all 100 representatives of diplomacy, the economy, politics, and business associations making valuable contacts in lively discussions about the present and future of regional cooperation, the evening came to an end at a German-Mediterranean buffet in the garden lit by the Brandenburg Gate. 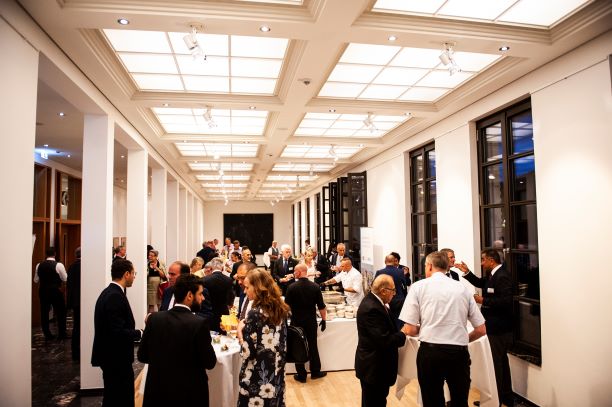 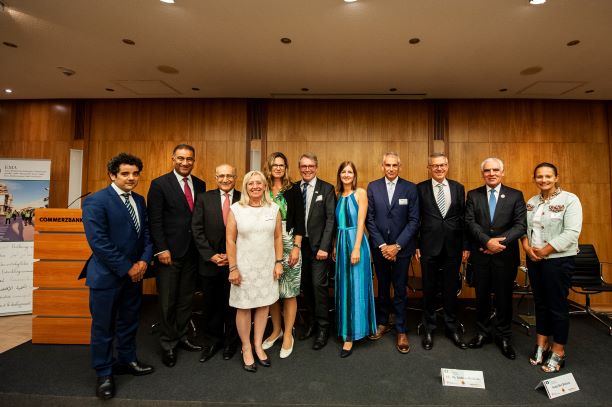 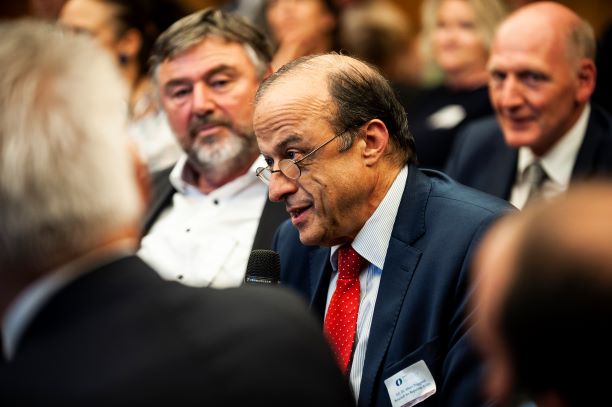 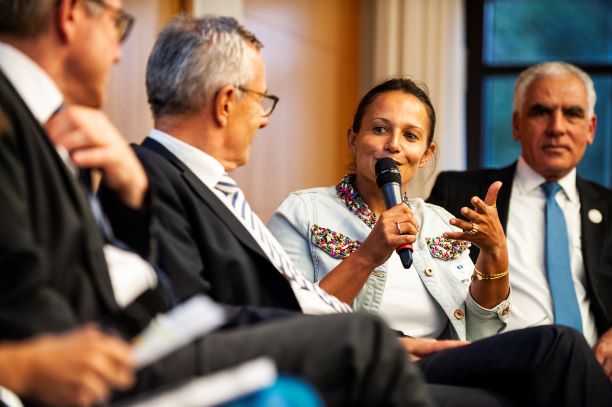 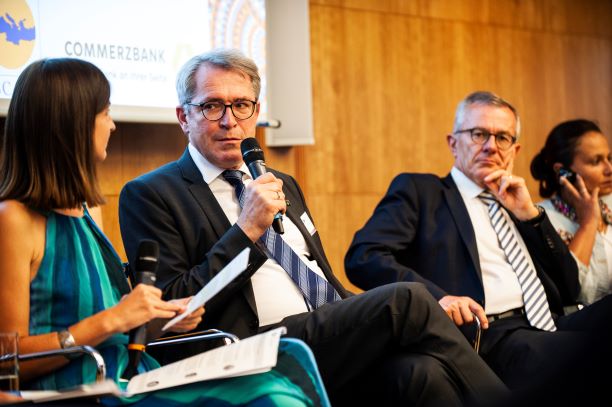 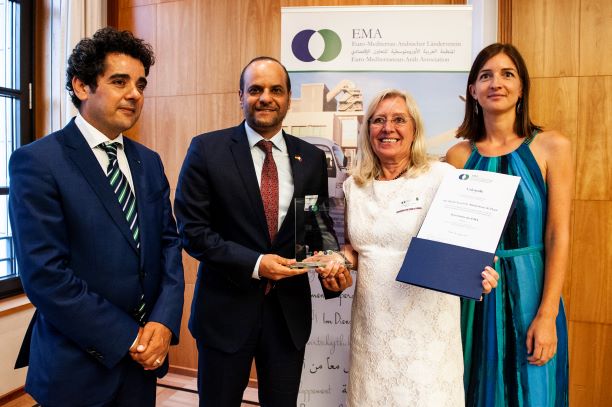 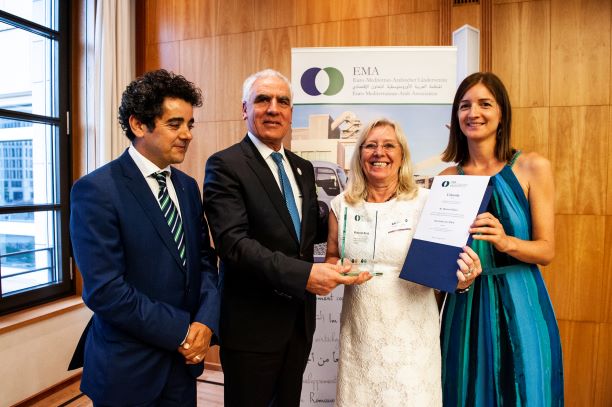 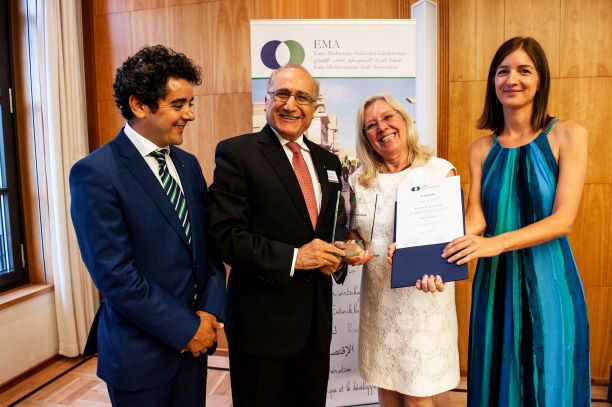 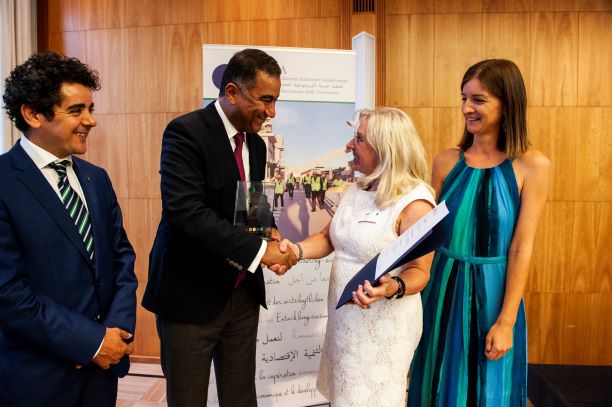 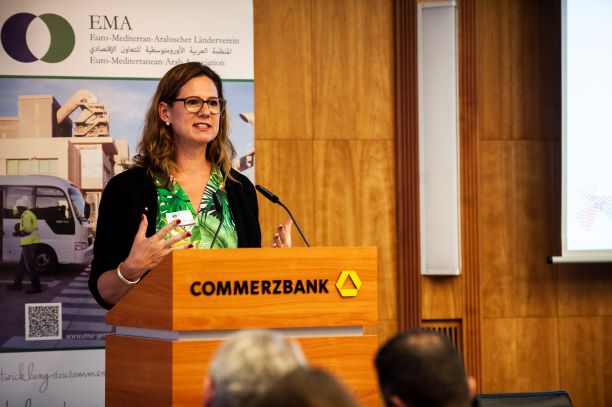 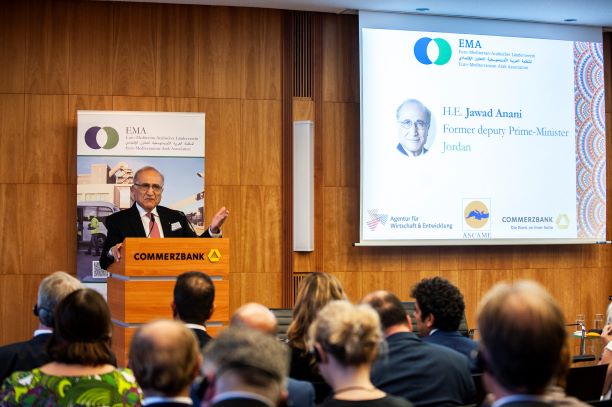 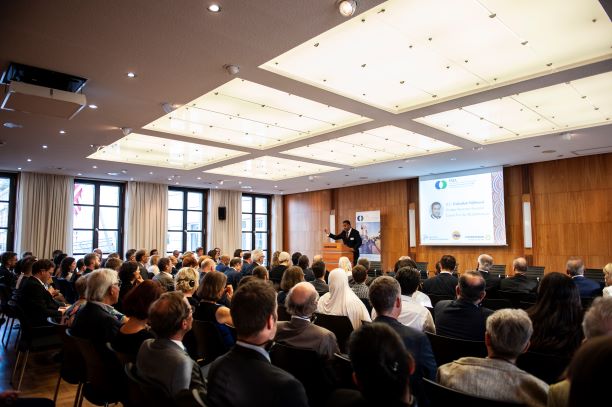 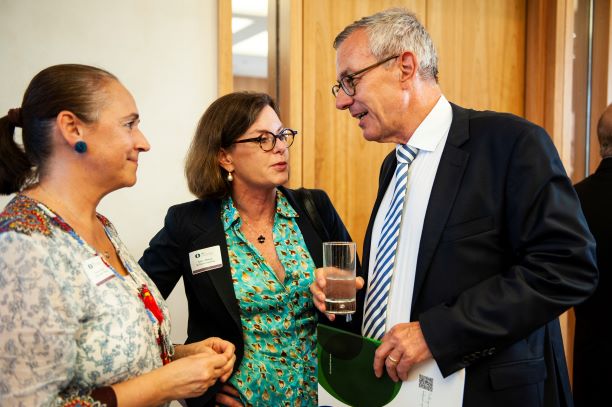 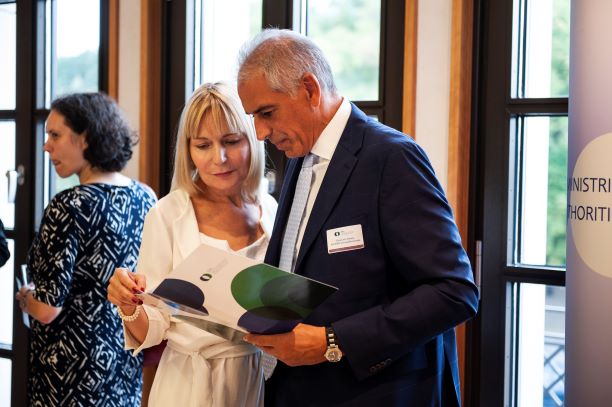 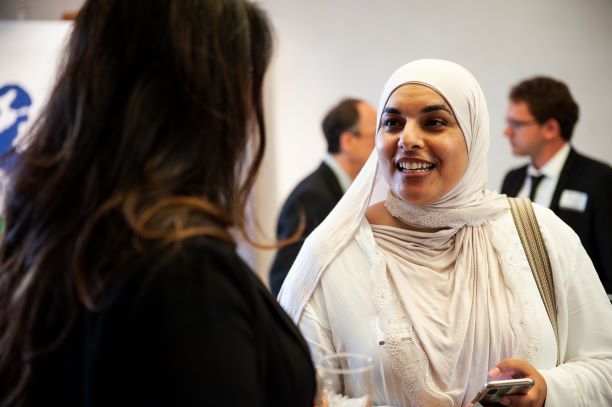