Her professional career started 1977 as deputy director of the State Central Bank's main office in Hamburg. Her career led her from being the representative for the German Federal Bank  to being the fiscal attaché at the German Embassy in Rome. In Brussels, Mrs. Sailer-Schuster worked as a member of the cabinet of  Internal Market Commissioner Mario Monti at the European Commission, afterwards as economic and financial advisor for the Economic and Financial Committe  of the European Parliament, as well as speaker for financial market issues at the German EU office. Prior to her position at the German Federal Bank's headquarters in Hamburg, Mecklenburg-Western Pomerania and Schleswig-Holstein she took over the management of the regional district of the banking and financial supervision at the headquaters in Berlin. 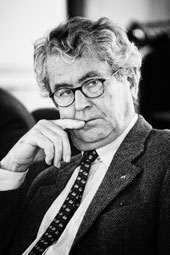 Professor Dr. Horst H. Siedentopf is a postdoc economist. His professional career started in international trade at large coperations such as  Esso, VEBA (today E.ON), Stinnes and MG (Metallgesellschaft), where he was working in management positions, and led him to many different regions of the world.

In December 1999, Prof. Siedentopf was appointed as Professor for Foreign Trade and International Management (AIM) by the HAW Hamburg. After he had been the honorary consul for Norway, he in 2007 became honorary consul for the Kingdom of Morocco in Hamburg. In this position, he got to know the EMA in his preperation for foundation and has stayed closely connected ever since.

Professor Dr. Ralf Busch, born in Berlin 1942, studied Pre and Early History, History of Art, Folklore in Göttingen and Vienna and graduated with a doctorate. From 1974 to1986 he was curator at the Braunschweigischen Landesmuseum, from 1987 to2002 Director and Professor of the Helms-Museum Hamburg-Harburg. Up until his retirement in 2007 Bis zu Busch was  Senior Scientific Director of the state chancelly Hamburg. Mr. Professor Dr. Ralf Busch has implemented and shaped many projects in the Near and Middle East.